The Week on Wall Street

Daily headlines about the coronavirus had little impact on stock market averages last week. Earnings and mergers had more influence.

Commenting that the economy is in a “very good place,” Federal Reserve Chairman Jerome Powell told congressional legislators that he did not currently see a significant recession risk.

“There’s nothing about this expansion that is unstable or unsustainable,” Powell remarked during his semi-annual report to the House Financial Services Committee. He did reiterate that the central bank was “carefully” watching the coronavirus outbreak, and that it could “very likely” have residual economic impact on the U.S.

Consumer prices have not advanced to this degree since the 12-month period ending in October 2018. Underneath this January headline inflation number, core inflation (minus food and energy prices, which are often volatile) was up 2.3% year-over-year.

These numbers are from the Consumer Price Index, maintained by the Bureau of Labor Statistics. The Federal Reserve monitors inflation using its core personal consumption expenditures (PCE) index, which remains below the central bank’s 2% yearly inflation target.

The Census Bureau said retail sales were up 0.3% in the first month of the year, matching the consensus forecast of analysts polled by MarketWatch. Additionally, the University of Michigan’s preliminary February consumer sentiment index monitoring consumer confidence factors went back above 100 last week (100.9).

Quote of the Week

“Act as if what you do makes a difference. It does.” 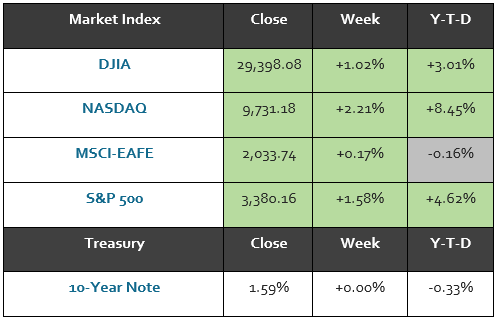 The market indexes discussed are unmanaged and generally considered representative of their respective markets. Individuals cannot directly invest in unmanaged indexes. Past performance does not guarantee future results. Weekly performance for the Dow Jones Industrial Average, Standard & Poor’s 500 index, and NASDAQ Composite is measured from the close of trading Friday, February 7 to the Friday February 14 close. Weekly performance for the MSCI-EAFE is measured from the Friday February 7 open to the Thursday February 13 close. U.S. Treasury Notes are guaranteed by federal government as to the timely payment of principal and interest. However, if you sell a Treasury Note prior to maturity, it might be worth more or less than the original price paid.  Weekly and year-to-date 10-year Treasury note yields are expressed in basis points.  International investments carry additional risks, which include differences in financial reporting standards, currency exchange rates, political risks unique to a specific country, foreign taxes and regulations, and the potential for illiquid markets. These factors may result in greater share price volatility.

Deciding to change your diet can feel daunting. It can be difficult to figure out which one is “best” for you. Many fad diets come and go, but there are a few that have stuck around, the most popular being the Mediterranean diet.

The Mediterranean diet is less of a traditional diet and more of a lifestyle shift toward healthier eating patterns. It’s modeled after principles of Italian and Greek cuisine, which have remained relatively unchanged since the 1960s. Consuming this diet has been correlated with lower rates of heart disease, type 2 diabetes, and other chronic illnesses. The diet emphasizes eating more fruits, vegetables, legumes, nuts, seeds, fatty fish, whole grains, and olive oil and fewer meats and dairy products. The diet is flexible. Elimination isn’t the intention, rather balance more toward nutrient-rich foods versus energy-dense ones.

Food is life, and making healthy choices can help support a healthier life. While the Mediterranean diet could be a good option for someone, no single diet will fit everyone’s lifestyle, preferences, and health needs perfectly. So, be sure to discuss any dietary choices you make with your physician or registered dietitian first. 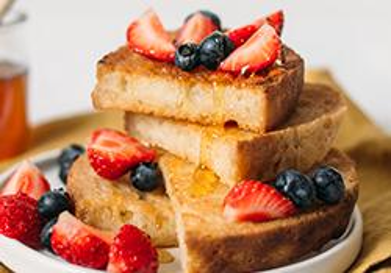 The Myth of Always Hitting Your Regular Distance

H. Hugh Briss, who plays golf every weekend at the local country club, faces a 170-yard approach shot over a pond. When he’s going good, Hugh can hit a 6-iron 170 yards. He selects his 6-iron. He hits it a little fat, and the ball plops into the water. Hugh, now peeved, was so confident he could reach the green.

Truth be told, Hugh was overconfident. He failed to account for a simple fact: we don’t hit our regular distance all the time. Our approach shots often don’t carry as far as we assume they will. When you really need to carry a hazard, take one club more than you think you might need. You might like the results. Remember, there is usually less trouble behind a green than in front of it.  the grain on a green, look at the rim of the cup. The edge that shows a slight browning of grass is the direction the grain goes.

* This information is not intended to be a substitute for specific individualized tax advice. We suggest that you discuss your specific tax issues with a qualified tax professional.

Upgrading to an Eco-Friendly Fridge

Is your refrigerator running? If it’s more than 10 years old, it may be time to upgrade with a more eco-friendly model. Besides saving money on your electric bill, you’ll be reducing your carbon footprint at the same time.

The most efficient models, according to Energy Star, are refrigerators with freezers located on the top. It doesn’t seem like a small change, but models with freezers on the bottom use an average of 560kWh compared to 360kWh.

The other big energy saver is to buy a model with LED lights. LED lights are roughly 80% more efficient than traditional light bulbs, which will reduce your energy consumption even further.

Financial planning and investment advisory services offered through Cleveland Wealth, LLC, a Registered Investment Advisor. Information presented is for educational purposes only and does not intend to make an offer or solicitation for the sale or purchase of any specific securities, investments, or investment strategies. Investments involve risk and unless otherwise stated, are not guaranteed. Be sure to first consult with a qualified wealth advisor and/or tax professional before implementing any strategy discussed herein. Past performance is not indicative of future performance.